Okay, so maybe it’s not that long.

At first glance, Noah Syndergaard, the young Met pitcher nicknamed “Thor,” didn’t change a lot either. Coming into the 2015 season, despite an up-and-down 2014 in Triple-A, Syndergaard was ranked as the ninth-best prospect in baseball by Baseball Prospectus, and was expected to make his debut by midseason. Sure, there were a few questions about his makeup and his reliance on his four-seam fastball, but the raw stuff was big and Syndergaard was expected to be good. He was called up in May and finished fourth in the National League Rookie of the Year balloting.

So how is the story of a very good prospect becoming a very good pitcher interesting? It’s because the Noah Syndergaard that finished off 2015 in the World Series had added two very important pitches that just didn’t exist when he reported to Spring Training. And those two new pitches might be the key to unlocking one of the most talented pitchers of this generation.

First, Syndergaard added a two-seam fastball, also known as a sinker. Syndergaard had nominally thrown a two-seam fastball in the Blue Jays system before he became a Met through the R.A. Dickey trade, but a search through the archives of Baseball Prospectus, Baseball America, and the author’s own notes found nothing indicating Syndergaard threw a notable two-seamer or sinker in the high minors. His four-seam fastball was just one pitch–a pitch that Syndergaard was often given credit for being able to manipulate–but was also criticized as straight, at least as much as you can criticize a starting pitcher touching 101 MPH. When Syndergaard came up to the majors, it was as a three pitch guy: four-seam fastball, curveball, and changeup. That quickly changed.

In a bullpen session after Syndergaard’s second major league start, Mets pitching coach Dan Warthen taught Syndergaard a new two-seam fastball grip. Over his time with the Mets, Warthen has gained a reputation within the baseball community for minor grip tweaks that create plus or better pitches for pitchers pretty much out of nowhere. The list of Warthen-derived pitch adjustments includes Jeurys Familia’s out of this world splitter, nearly everything marginal prospect-turned-major league ace Jacob deGrom throws, and, as we’ll discuss later, an entire major league staff’s worth of 60-plus sliders.

The results from Warthen’s latest grip adjustment, the “Thor” two-seamer, were nearly instantaneous. In his first two major league starts, Syndergaard induced eight ground balls; in his third and fourth starts, he got 23 grounders. The pitch was very quickly identifiable as a new, distinct, plus offering, and Syndergaard continued to mix it in for the rest of the season. 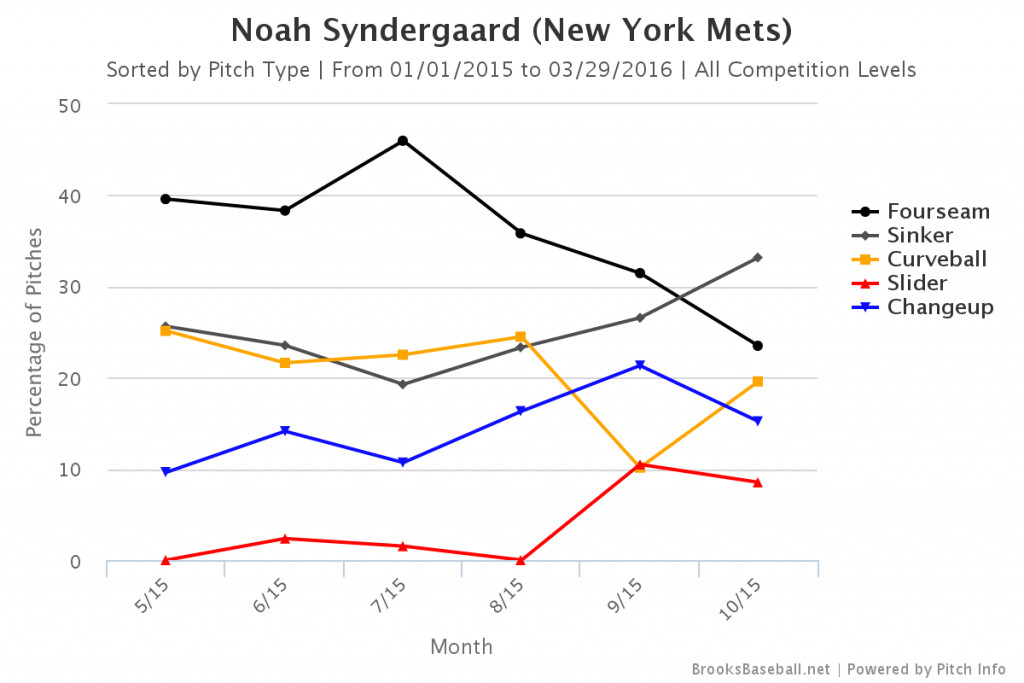 Per Brooks Baseball’s Pitch F/X data, Syndergaard threw a mix of 36.3 percent four-seam fastballs and 24.8 percent sinkers in 2015, and in the playoffs his sinker usage actually outpaced his four-seam usage. Compare Syndergaard’s fastball usage in the majors to his fastball usage at Triple-A in 2014, where he threw 66.8 percent four-seam fastballs over a 15-start sample recorded by Mets minor league enthusiast Astromets, and the contrast is stark.

Much ado has been made about the slider that numerous Mets pitchers have added or improved at the major league level under the tutelage of pitching coach Dan Warthen. Warthen teaches a special slider grip that results in higher velocity and tighter spin than a typical slider, which has become known as the “Warthen Slider.” This pitch has been successfully picked up at the major league level by, among others, Matt Harvey, Jacob deGrom, Jeurys Familia, Hansel Robles, and Steven Matz. Sometimes this pitch is a new addition and sometimes it replaced lesser sliders or cutters in their arsenal.

Syndergaard did not regularly feature a slider as a prospect, but as early as 2013, then-Baseball Prospectus prospect writer and current St. Louis Cardinals scout Zach Mortimer suggested that Syndergaard would add a slider or cutter as he moved up in levels. In several interviews over the years, Syndergaard mentioned that he had tinkered with a slider, but had mostly used the slider principles Blue Jays and Mets coaches taught him to gain velocity on his curveball. Syndergaard had thrown a small handful of slider-like pitches in the majors in June 2015, but not with the premium velocity and break that would appear later.

Syndergaard first started messing with something more resembling the Warthen Slider in a game against the Nationals on July 23. Syndergaard threw eight mostly good looking sliders ranging in velocity from 88 to 92 MPH. Then he shelved the pitch until the Mets had effectively wrapped up the division in September. By the time Syndergaard faced the hapless Atlanta Braves on September 12th, he was taking the ball with a 9.5 game divisional lead. Pitching on 12 days of rest with a huge playoff lead against a team that more or less couldn’t hit would be exactly the situation where a pitcher could try new things in a game situation. So the Warthen Slider popped back up … and the pitch was electric.

Syndergaard only threw 19 pitches that Brooks Baseball classified as a slider before September 12th. Including the playoffs, Syndergaard threw 67 sliders from that date on, featuring the pitch 9.3 percent of the time. That’s still not overly-frequent usage, and the pitch sometimes disappeared in games when Syndergaard didn’t have the feel or need for it. But when Syndergaard did throw the slider, it was nearly unhittable. In the 2015 regular season and playoffs, batters whiffed on Syndergaard’s slider on 55.3 percent of swings; only one starting pitcher throwing more than 50 sliders in 2015–Jerad Eickhoff–put up a comparable rate. Small sample size and sustainability caveats obviously apply, but Syndergaard’s slider looks like an impossible pitch to hit when he has command of it.

But somehow, with only a few exceptions, Syndergaard’s new weapon flew mostly under the radar in 2015. Various media outlets reported early this spring that Syndergaard was developing a cutter, then clarified it was the Warthen Slider without noting that he had thrown it on and off last season, and that it was a key part of his arsenal by the time the Mets entered October. Syndergaard has worked on the Warthen Slider for much of the spring exhibition season, and while we don’t have PITCHf/x data for the Grapefruit League, it looks like the same devastating pitch he flashed in late 2015.

Even before he started regularly throwing the slider, Syndergaard had already made it most of the way in his journey to a top-of-the-rotation pitcher. In his rookie regular season, Syndergaard posted a 3.24 ERA and 3.59 Deserved Run Average with 166 strikeouts against only 31 walks in 150 regular season innings, and was one of the brightest stars of the playoffs. Syndergaard shifted so quickly from an underwhelming 2014 in Triple-A into an overwhelming 2015 in the majors that it doesn’t seem like complete folly to expect another big jump, but there’s a limit to how good pitchers can be that aren’t named Clayton Kershaw. Or is there?

Consider this: both of Syndergaard’s fastballs grade at a true 80 on the 20-to-80 scouting scale. He’s the hardest throwing starting pitcher in the major leagues, with little velocity difference between the two fastballs, and good movement and command. The slider, as new as it is, is flashing enormous potential. Before the 2015 season, with his prospect stock a little down, Baseball Prospectus graded his curveball–nicknamed by Terry Collins the “hook from hell” in 2014–as a potential 70 pitch, with the change as a potential 60-plus pitch. In his rookie season, they were both effective major league offspeed pitches, and at least flashed the grades BP projected.

So what comes next? The kind of arsenal we’re talking about Syndergaard might end up with … that could be better than any righty in the game. Maybe he gets all the way there, maybe not. What is pretty obvious now is that health and pitching gods willing, “Thor” is going to be pretty special.

Tags: Noah Syndergaard, Warthen Slider |
Jarrett Seidler
Follow @jaseidler
Jarrett Seidler is a columnist for BP Mets, a minor league contributor for Baseball Prospectus, and the co-host of For All You Kids Out There, the BP Mets podcast.
read more from Jarrett Seidler

5 comments on “A Mightier Thor”