Shifting is a sensation that has taken over Major League Baseball the past few years and its implementation has been well documented in recent books such as Travis Sawchik’s “Big Data Baseball” and Ben Lindbergh and Sam Miller’s “The Only Rule Is It Has to Work.” As the popularity of the use of the shift in the game has grown, simultaneously it has created a debate between the new age stat heads and the old-school traditionalists. At one point, Rob Manfred even discussed whether or not he would be willing to ban the use of the shift. But despite the widespread usage of the shift in MLB and a front office led by the Sandy Alderson, the Mets still tend to lag behind.

Recently I read an article on BP Milwaukee exploring the shifting patterns of the Milwaukee Brewers, and thought it interesting to look at the Mets in the same way to see how they have embraced the shift and how they use it relative to the rest of the league.

Data on shifting starting from 2010 is now available from FanGraphs.com in terms of how often teams shift and how they perform when they shift.  The Mets are an interesting team I quickly realized in that while they were quick to adopt the shift, they first fluctuated from 2010 to 2011, which is presumably due to the change in manager from Jerry Manuel to Terry Collins. However, as expected, since 2011, the Mets have increased the percentage of times they use the shift.

However, what is even stranger about the Mets is their tendencies relative to the rest of the league. While being leaders in shifting the first few years (2010 to 2012), by 2013 they fell behind the league average and have continued to be in the bottom third of the league for the past two and a half seasons.

This is more notable in the following graph which shows the similar trends of the New York Mets. While they have been increasing their usage they have continuously lagged behind the rest of the league. It could be possible that this drop in shifting coincides with the rise of the New York Mets star pitchers. Zach Wheeler in particular during the 2014 season asked the Mets to shift less when he was pitching, as he is a non-believer in analytics and blamed shifting for ground balls getting through the holes that he claims would normally be covered. 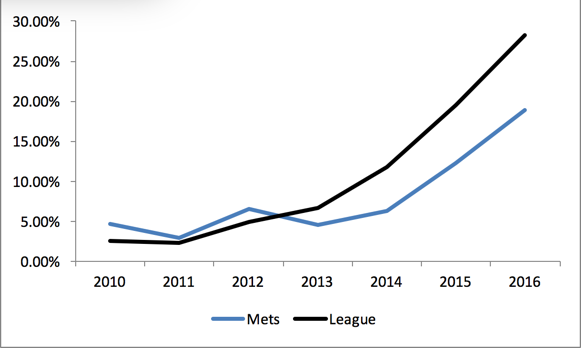 How the Mets fared while using the shift:

It is strange how little the Mets do tend to shift relative to the rest of the league. Luckily they have been able to be successful despite not having to utilize the shift. However, with the rest of baseball continuing to use the shift going forward, I would expect the Mets to continue to use it and follow suit.

How did the Mets fare against the shift?

(That edge is probably not acquiring Jay Bruce, in my opinion.)