Noah Syndergaard throws harder than practically anyone in the MLB, yet he’s been making waves with his comments that he plans to improve upon his first full season in the bigs by actually throwing slower. Well, that and a few other proclamations about somehow throwing harder, too. No, Syndergaard isn’t playing tricks with us. He genuinely intends to do both.

Thor reported to camp proudly proclaiming he’d eaten nothing but “bowls of doom” for the last four months, resulting in an added 17 pounds of muscle with an eye towards throwing even harder. (Yes, harder than his 98.9 mph average fastball from the 2016 season.) As pundits around Port St. Lucie tried their best to fathom Syndergaard throwing harder than he had in seasons past, that talk around camp died down before subtly focusing on the exact opposite.

In Syndergaard’s first start of the spring, he went out and displayed his signature upper-90s velocity throughout two shutout innings against the Astros. Along the way, though, he mixed in more than his usual share of changeups–ones that raised the eyebrows of those familiar with Noah’s usual repertoire, and ones eliciting reactions of “mmmm” from Keith Hernandez in the SNY booth. Let’s take a look and see what all of the fuss was about:

Great! A gorgeous looking changeup to strike out Marwin González in a Grapefruit League game. That’s nice, moving on … oh, what’s that Noah? You have something to say?

“I love throwing it. I think it has the potential to be my best swing-and-miss pitch.”

Syndergaard’s got a soft spot for his changeup, and I’m not quite sure how to feel about this. We all know he can throw gas, offers a 95-mph slider, and a “hook from hell,” but there’s never been much commotion about Thor’s changeup until now. If that changeup is going to be a true swing-and-miss offering, it’s going to have to get the job done with two strikes, so let’s take a look at those sorts of scenarios.

For starters, Thor shied away from his change with two strikes, and that might be the best indication that the pitch isn’t up to par with his other offerings. In two-strike counts, Syndergaard threw a changeup 9.52 percent of the time in 2016, below both his curveball (10.5 percent) and his slider (28.23 percent).

When he did decide to use the changeup as a put-away pitch, the raw metrics were less than encouraging: 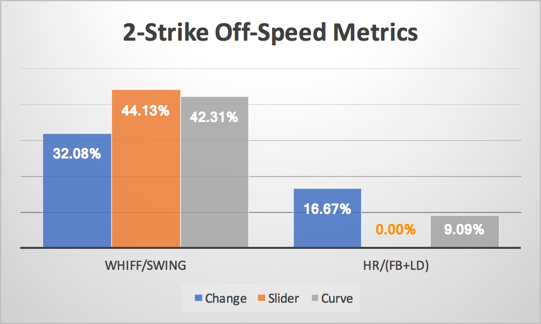 It’s definitely not great. Sure, any pitcher with a 100-mph fastball is going to be able to get away with pretty much anything when he’s up in the count. But that’s the thing: Syndergaard isn’t trying to “get away,” he’s trying to dominate. Those numbers aren’t dominant, and neither are these results: 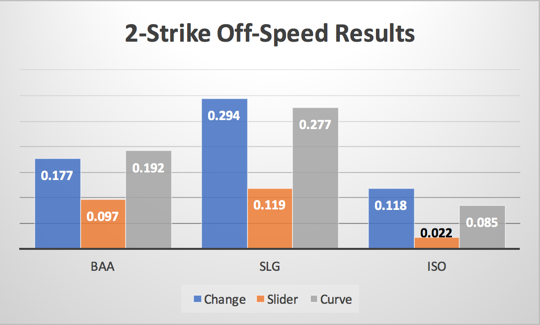 With this data, I think that we can establish that in 2016, Syndergaard was better off opting for a different off-speed pitch in two-strike counts. It yielded less whiffs, more home runs, a high batting average, slugging percentage, and ISO.

“Just stick to the slider!” we all want to yell in unison.

Not so fast. Maybe Syndergaard knows something we don’t. Maybe he knows he was super unlucky with his changeup last year, and pitchers with similar changeups usually have much more success. What a novel idea! Let’s check that theory.

To do this, we should find some pitchers who throw changeups like Noah does. Only problem is pretty much nobody throws a 90-mph changeup, so we’ll instead use the drop in velocity from a pitcher’s fastball to his changeup. Listed below are four of the most similar changeups to Syndergaard’s.

It’s not an awful list, but it’s also not one you would otherwise expect to find Syndergaard on for any other reason. Guys like Ian Kennedy and Tanner Roark stand out to me, because they’re certainly not hard throwers. For them to succeed to the extent they do, they’re probably doing something right with their off-speed pitches. Let’s see how the changeups of these five guys fared in 2016.

All in all, Syndergaard finds himself in the middle of the pack in pretty much every statistic. Unfortunately for Noah’s changeup crush, this was probably to be expected. Guys with similar changeups getting similar results from those similar changeups is about the least shocking thing the data could show.

Looks like we’re out of luck on that front, too. The last hope for Thor’s change is that he’s got something up his sleeve he doesn’t want to tell us about. Maybe he’s been messing around with a new grip, arm slot, or release point. The mere thought of this had me scrambling to the PITCHf/x database at Brooks Baseball only to be disappointed that there’s no data from Mets spring training. Darn.

To simulate the “shiny new toy” syndrome that Syndergaard might be experiencing, I turned to some pitchers who inexplicably started throwing more two-strike changeups in 2016. It’s by no means an exhaustive list, but it’s certainly five more guys who, for some reason, leaned as hard on their changeups as Syndergaard claims he expects to do.

We can pretty much toss these players into two different buckets for “reasons they started throwing their changeup with two strikes more.”

From the looks of it, the only player who clearly falls into bucket #1 would be Hector Santiago. Everyone else’s changeup either looks too similar to their old one, or even looks a bit worse. But hey, maybe it’s a command thing. Maybe all of the bucket #2 players have the same changeup, but spent their offseason learning to command it better. That’s certainly possible, so let’s see if the results lend themselves to that theory:

Let’s play the fun game where we put pitchers in buckets again, shall we?

By my count, I have Danny Duffy and Hector Santiago squarely in bucket #1, and everyone else somewhere around bucket #2. Sure looks like Hector Santiago knew what he was doing, doesn’t it?

So, what does this all mean for our guy, Noah Syndergaard? I’m afraid to say we might want to tap him on the shoulder and ask him as politely as we can to please not use his changeup any more than he did last season. That is, of course, unless he somehow learned to throw it slower and with more drop like Hector Santiago did. In that case, sure, give it a shot! Otherwise, stick to what got you here: 95-mph sliders, hooks from hell, and countless bowls of doom.

What do you think after the first start? Got a lot of swinging strikes with it and saw a big change in Horizontal movement!

Lots of swinging strikes, for sure! Definitely looked great yesterday… let’s see what the numbers say. The differential between FB and CH velocities increased from ~8.5 to 9.5 mph yesterday, the horizontal movement on the CH went from -8 to -9.81 inches, and the vertical movement also increased from 5.8 to 6.3 inches! Seems to me Thor might actually have a new changeup, which means he can throw it all he wants!

Thanks for the response! It (he) will be incredible if this actually sticks.