The Mets and Phillies played a meaningless baseball game last night in front of 6.5 people on a cold, rainy, miserable evening at Citi Field. Rain cut the game short in the sixth inning with the Mets up 6-3. About an hour after the tarp was put on the field, the game was called and the Mets were deemed victorious. The rains were welcomed by those who still want to see the Mets win, or those who have to write a recap of the game and wake up at an early hour. But the rains were unwelcome to those who care more about the Mets’ draft pick position at this point, as the team is “chasing” the Phillies in the race for the league’s worst record, and the Phillies were looking like they were climbing back into the game before it was called.

The Mets went off on Phillies starter Nick Pivetta early in the game, pushing across six runs against him over five innings, highlighted by a Travis d’Arnaud two-run homer in the first. The Mets were up 6-0, and Robert Gsellman was cruising through five innings before the Phillies started to make noise in the sixth. An RBI double and a two-run homer got the Phillies back within three, but Gsellman escaped the inning, and the game was called before the Phillies could come to bat again against the Mets’ ghastly bullpen.

And don’t worry, it’s okay if you just glossed over that last paragraph, though I’d prefer you read it. But it really is okay, because, 1. I, frankly, did not care about the game at all either, and 2. I have your click already, sucker. But mostly because of number one. Let’s focus on number one.

Naturally, game recaps on this site have mostly centered around negativity. That’s what happens when the Mets are as bad as they’ve been since the Art Howe era. And with the Mets sucking, the west coast of the country burning to the ground, the east coast being destroyed by hurricanes, and UberEats taking over the world as we know it, we can use something positive to make us feel good. So, if I can be affored the opportunity, allow me to buck the negativity trend and hijack this space with a story that may allow you to feel nice things, even for just a moment.

In December 2006, I attended small baseball clinic in a high school gym on Long Island for a bunch of kids. It wasn’t very notable, except for the fact that the clinic was being taught by none other than David Wright himself. At this point, Wright was 23 years old, was already an All-Star, and had already signed a $55 million contract extension. There was really no reason for Wright to be doing this thing. There was no price of admission; there was nowhere that I can recall the proceeds going to. He really didn’t need to do it at all, and most 23-year-olds would much rather spend their weekends doing other things than teaching baseball to snot-eating kids in a sweaty high school gym out in Suffolk County. But Wright did it anyway, and he did it all with a smile.

The actual clinic was totally pointless, and amounted to nothing more than Wright just giving a little-league-coach-level of advice to a bunch of kids who weren’t going to retain any of the information anyway. Then he did a Q&A, where kids and their starstruck parents got to stumble their way through some vapid and incoherent questions. In fact, I vividly remember my own father stuttering his way through a question about breaking out of slumps. Yes, my father once spoke to David Wright.

There was a moment in that Q&A, though, where a very small child who was there tried to ask a question. He couldn’t get the question out, and wasn’t talking very loudly, so Wright invited him up to the microphone to ask the question face-to-face. Wright held the microphone, and gave the kid his bat to hold as he asked the question into the microphone. Here’s a picture of that moment: 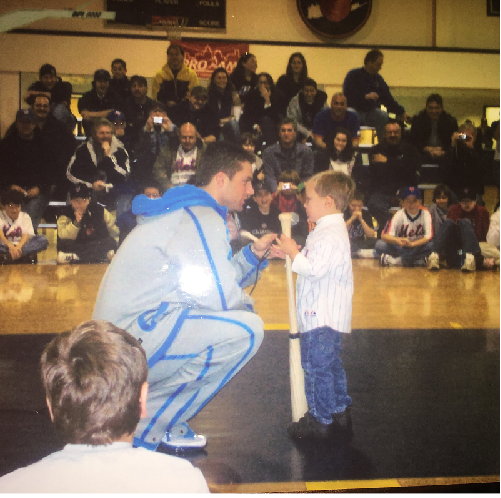 OTHER NEWS OF THE DAY:

Matt Harvey had his start pushed back from last night to tonight against the Reds. The Mets claim it was weather-related, but the fact they were going to pitch Harvey on three-days rest fresh off the disabled list in a lost season may have something to do with it as well.

The Mets welcome the Reds to Citi Field, as the two teams look to play out the string down the stretch. Matt Harvey goes against Tyler Mahle at 7:10 p.m. Good seats are still available.

1 comment on “Game Recap September 6: Let It Rain Over Me”