After being the Tigers’ primary leadoff hitter to start his career, Granderson was forced down the lineup when he was acquired by the Yankees since Brett Gardner was entrenched in the role. Then, as a Yankee, Granderson became one of the game’s best home run hitters when he took advantage of the short porch in left field, topping out with a 43 home run season in 2012. When the Mets signed him to a four-year deal before the 2014 offseason, Sandy Alderson and Terry Collins thought they were getting latter version of Grandy, a middle of the order slugger. That was hardly the case–Granderson was exposed and saw his BABIP drop dramatically in his Mets’ debut season. In wasn’t until Collins returned him to the top of the lineup and reunited him with Kevin Long that Granderson re-emerged as an impact performer.

Granderson’s selectiveness and ability to work the count has been apparent since his return to the leadoff spot. Since the beginning of 2015, Granderson has the second-lowest swing percentage in all of baseball: 37.7 percent (47.4 percent is the MLB average). What’s exciting with Granderson isn’t that he began swinging less and seeing more pitches, but that was laying off the pitches that had given him trouble throughout his career.

Like many lefties, Granderson has been a low-ball hitter throughout his career. In Granderson’s case he is an extreme low-ball hitter, at least in terms of the pitches he has had the most success with. During past seasons though, Granderson had trouble laying off pitches in the top third of the strike zone where he was far less effective. 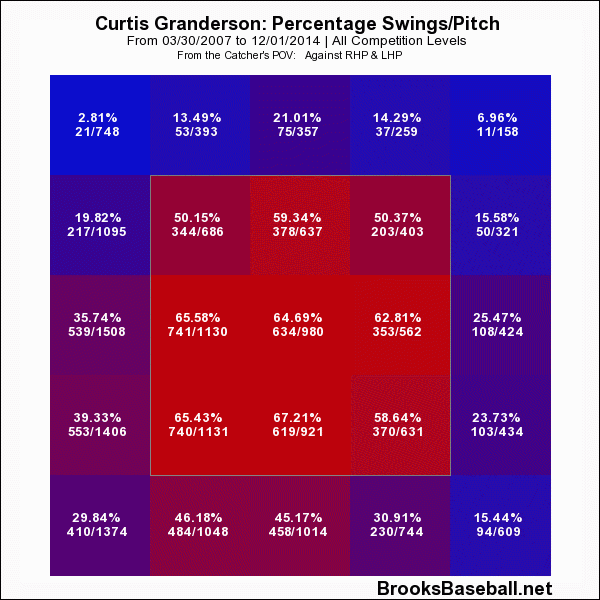 Furthermore, Granderson has excelled at laying off pitches above the letters. Previously, pitches above the strikezone were a kryptonite for Granderson–his whiff rate spiked and his slugging percentage plummeted. Despite his lack of success, he chased above the zone over 16 percent of the time prior to 2015. Now, however, Granderson is far more disciplined, chasing just 7.5 percent of those pitches. By laying off pitches up in the zone, Granderson isn’t giving away at bats (or falling beyond in the count) like he used to.

In conjunction with honing his approach, Granderson has cut down on his swings and misses too. In his Yankee years, he developed a reputation as a free swinger, but that’s hardly been the case as a Met. In his final year in the Bronx, Granderson’s whiff rate was 13.6 percent–the highest of his career–and he also had the highest swing rate of his career. Last year, Granderson set a career low in swinging strike rate (6.9 percent, which was well below the league average 9.9 percent). Not only is Granderson attacking his pitch, but he’s putting them in play, too.

Granderson was a star for the Mets last season.  Thus far, he and the team haven’t found their stride but Graderson has continued to lay off the high stuff and work the count. Once his early season BABIP fluctuations work themselves out Granderson will continue to be a presence at the top of the lineup … so long as he keeps doing what he’s been doing since the start of 2015.