Yasiel Puig is good and fun and exciting. The Mets are not.

For that reason, and that reason alone, I understand a little bitterness. The Mets have, by all accounts, thrown away a promising season and now find themselves fighting for relevance, let alone a postseason berth. So yeah, I get that they’re a little grumpy.

Everything else about Wednesday night’s dust-up is pathetic at best, embarrassing at worst.

In the bottom of the fourth inning, Yasiel Puig hit a three-run homer off Tyler Pill to put the Dodgers up 5-1. The home run was not that much of a surprise: Puig hits a lot of home runs and Pill gives up a lot of home runs. I’m pretty sure I could hit a home run at Dodger Stadium this week. But Puig pimped his dinger, as he is known to do. He posed and he showboated and he began a slow, meandering trot around the bases.

This is fine! The Mets giving Tyler Pill multiple starts in what was supposed to be a competitive season isn’t fine, but everything else is! Want to make baseball fun? Let players have fun.

So as Puig rounded first, Wilmer Flores, the once and future king, yelled at him. Puig dropped an F-bomb, then kept running — if you can call it running. Eventually he crossed home plate, where Travis d’Arnaud was waiting with a scowl and some chest-puffing. Because boys will be boys and home runs are offensive or something. I’d say the Mets are more offensive, but that’s just me.

Maybe Wilmer Flores was having a bad day. Maybe we can’t have nice things. Whatever the reason, he threw a little hissy fit because Puig…took too long around the bases? Took too long to leave the batter’s box? Is good at baseball?

After the game, the shortstop-turned-third-baseman-turned-first-baseman said Puig “disrespected them.”

Well, he’s not wrong there. The Mets, losers of their last six of seven, are playing horrible right now. Or, more likely, they just are horrible. That’s not Puig’s fault. Blame yourself and your position players for not scoring enough runs or for botching routine double plays. Blame Tyler Pill for throwing the world’s most hittable pitch. 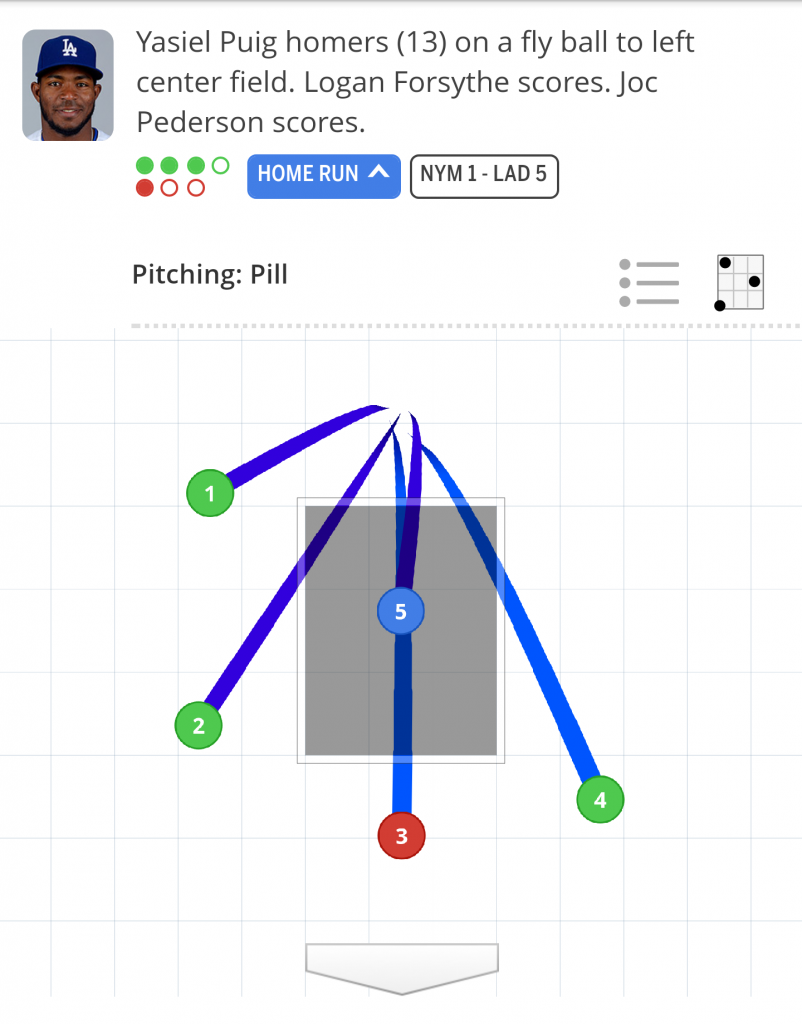 Don’t blame Puig for doing his job with a little flair.

To his credit, the outfielder had the perfect answer to Flores’ “disrespectful” comment: “If that’s the way he feels, it might be a result of them not playing so well.” That’s certainly the diplomatic way to put it. He also could have gone with “shut up and mind your own business.”

Here’s the thing about Yoenis Cespedes: He, like Puig, is fun to watch. But he doesn’t have the right to tell anyone not to celebrate.

He doesn’t get to tell people what to do either.

After a decade in the majors, you’d think Jay Bruce would know how to pick his battles better. He does not. Instead, he answered a reporter’s question with a baffling response that has little to do with anything: “Yasiel is very, very talented. But I mean, he’s not David Ortiz. This guy doesn’t have 500-something home runs.”

Is that the arbitrary line? Five hundred home runs and you’re allowed to showboat? What about 475 home runs and a walkoff grand slam? How about 350 and a go-ahead homer in the World Series?

Almost everyone in orange and blue came down on the wrong side of this stupid scuffle. Wilmer Flores threw a temper tantrum. Yoenis Cespedes and Jose Reyes, the last people on earth to preach appropriate behavior, did exactly that. Jay Bruce got involved for no particular reason. And the Mets lost again.

Tags: Unwritten rules are dumb |
Kate Feldman
Follow @kateefeldman
Kate Feldman is the editor-in-chief of BP Mets and a lifelong fan of baseball teams that only make her miserable.
read more from Kate Feldman