Hansel Robles’ exactly 0.0 WARP in 2017 does not make him the New York Mets’ worst relief pitcher, but his performance is not inspiring any fans to have belief in his abilities. Every time Robles is brought into games, Mets fans are waiting for him to just give up more runs, and, even more memorably, that famous point in the air on home runs. And while Robles was banished to Triple-A Las Vegas for just 18 games, he’s still seen a drastic drop in results this year, dropping from an 0.8 WARP in 2016 to a 0.0 WARP pitcher so far in 2017.

Robles’ first problem is that he is having more difficulty with his command this year. While his strikeout rates are up from 2016, his walk rate is up even more. For example, he has struck out approximately 10% more hitters in 2017 than in 2016, but his walk rate is up by more than 25%.

There are two main explanations to why one’s walk rate would increase by such a large percentage. The first is that the pitcher, in this case Robles, is throwing fewer pitches in the strike zone. This is true as Robles pitches in the zone defined by Zone% below has dropped from 47.1% to 43.9%. In addition, we see that the competition is swinging less at those pitches as the O-Swing% (outside of the zone swing rate) has fallen from 28.3% to 23.7%. Therefore, the combination of these two is resulting in a higher amount of walks.

From looking at the charts, courtesy of BrooksBaseball, of where Hansel Robles is pitching the ball, there doesn’t appear to be a huge difference in location. He’s missing more on the inside part of the strike zone to right-handed hitters this year, but given that opposing hitters hit those balls well last year in terms of slugging percentage, it makes sense that he might be more careful in that area. 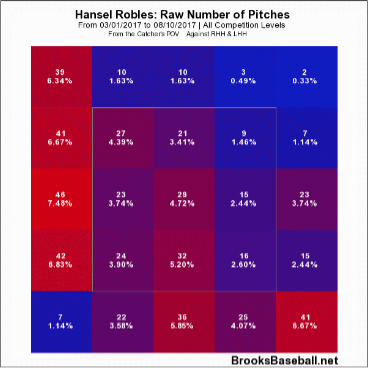 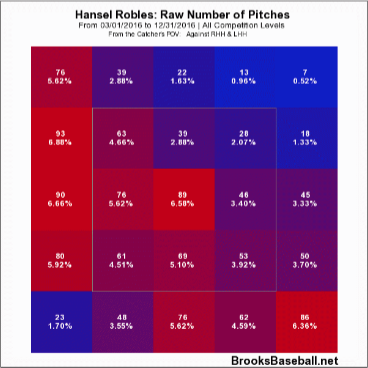 In terms of how Robles is pitching though with his pitch usage, there are not many differences year-over-year. He is relying less on his fastball by a very slight margin and favoring his slider more, but overall, his pitch mix remains similar and at similar velocities.

Therefore, Robles’ main problem is that he just isn’t hitting the strike zone as much and not getting hitters to chase those outside pitches. Hitters are waiting more for their pitch and are able to crush it when they do. Robles is giving up more fly balls this year, although a modest five percent increase or 2.2 percentage point increase. His home run rate, however, is up 98 percent from 8.2 percent to 16.2 percent. Compared to the rest of the relief pitchers in the league, his fly ball rate is 21 percent more than the league average and his home run to fly ball ratio is 29 percent higher than the league average. This combination of the two is a recipe for the unfortunate setback in his career that has occurred this season.

While Robles over the whole season has suffered, there is some room for optimism. In July, when he was called back up from Las Vegas, he pitched 6.2 innings while posting his highest strikeout rate and lowest walk rate to date. Unfortunately, he hasn’t been as good in August so far, but both bad appearances occurred in Colorado including one in which he was pitching with numbness in his fingers. Since returning from a short rest, he has been much better in his latest appearances against Los Angeles and Texas.

If the real Hansel Robles is the one we saw in July and for a few games in August, the Mets might have a viable reliever to complement A.J. Ramos and Jeurys Familia in 2018. If he’s really the volatile, unpredictable relief pitcher who sparks as much fear as he does hope, he should find himself pointing to the Vegas skies next year.