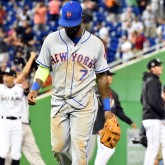 Mets News Entering last night’s game, the first-place Mets had won five in a row. I’d say the Mets were “fresh off their fifth straight victory,” but nobody was fresh after Thursday’s five-hour-and-thirty-eight-minute, 16-inning affair. Except Sean Gilmartin. He was recalled from Las Vegas today to bolster a bullpen that had thrown 18 innings over the past […]