That title isn’t clickbait, I swear. You still don’t believe me. I don’t blame you. It’s true, though, and here’s the proof: 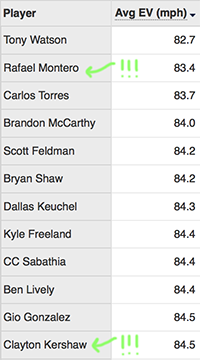 See? I didn’t even trick you with some bogus stat like “pitcher xFIP in the 6th inning on Tuesdays during 100% totality.” The statistic listed in this leaderboard from baseballsavant.com is average exit velocity, and it’s the pitcher counterpart to the number we often see paired with Giancarlo Stanton’s monster home runs.

I don’t think I need to explain exit velocity much more, but this means that, on average, Rafael Montero allows batted balls hit softer than Clayton Kershaw does. Even though Montero has been better as of late with a 3.22/3.56/4.98 ERA/FIP/xFIP over the last month, this still comes as a huge surprise. Limiting hard contact sure feels like a valuable skill, but is it? Let’s take a look.

To start, I ran a simple correlation between exit velocity and ERA in 2017. It’s not groundbreaking stuff, but it’s a necessary stepping stone in the process. Here’s the result:

So there’s certainly some relationship, but it’s far from conclusive. It’s clear here that Montero is a significant outlier, which invites further exploration. On baseball savant.com, there’s a few more exit velocity-related statistics to play around with. Feel free to check them out for yourself here. Using these other metrics, I did a quick check to see if any of them are better estimators of ERA than just exit velocity. Below are the r-squared values for the other stats: 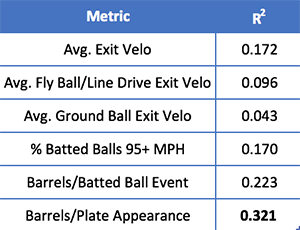 While average exit velocity is good, it seems like this “barrels” statistic might be on to something even better. Barrels are defined by MLB.com as balls struck at an exit velocity greater than 98 MPH, and having a launch angle roughly between 26-30 degrees. There’s a bit more nitty-gritty to it, which you can check out here, but that’s the general idea. Let’s see where Montero falls on this graph.

While he doesn’t quite lead the league in this metric, he’s still well above the average. That’s promising for Montero, but here’s another thought: maybe metrics like exit velocity and barrels, similarly to BABIP, are mostly related to luck and aren’t particularly indicative of any skill.

Despite Clayton Kershaw residing towards the top of the original leaderboard, there were some curious names, after all. To solve the question, I looked at pitcher exit velocity for 2016 and 2017 to see if it was a repeatable skill. 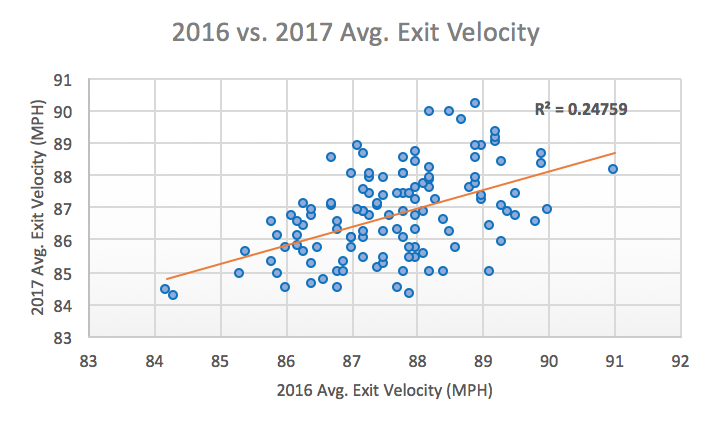 We keep being teased with significant, but not substantial relationships. An r-squared of 0.24 is nothing to scoff at, but there’s also a lot of room for error here. Usually, I’d hang my head and declare that we can’t possibly know if Rafael Montero will continue to limit hard contact. However, we do have a bit data on Montero dating back to 2015, so let’s examine his past exit velocity performances.

Even when Montero has been at his absolute worst (2015 and 2016), he’s always been at least above-average in exit velocity. Is that an encouraging sign? Probably not. If this is the 99th percentile version of Montero that we’re seeing these days, that’s not great. If this happens to be a repeatable skill that can be replicated along with meaningful improvements in other areas (read: control), then there may be hope for Montero. Until then, we’ll take pleasure in knowing that Clayton Kershaw can’t hold a torch to Rafael Montero when it comes to average exit velocity.

Very nice article, like oxygen to a suffocating Mets fan. But yeah, those base on balls are the killer.