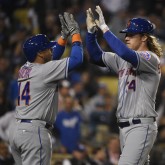 27-year-old Mets catcher Travis d’Arnaud remains on the DL this week; unfortunately for both him and the team, the news of his injury was not really news at all. D’Arnaud has suffered a host of injuries over his minor and major league career, and has rarely been healthy for an extended period since 2010. From 2010-2013 […]