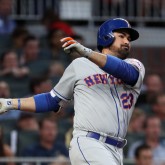 Before I get into it, this is by no means a proclamation that the Mets are back in anyway. But Sunday night’s win against the Yankees to break a gut-wrenching losing streak felt good. Then, the subsequent release of Adrian Gonzalez and DFA of Jose Lobaton flashed the first signs of sensibility from New York’s front office […] 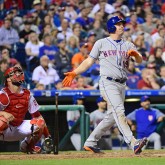 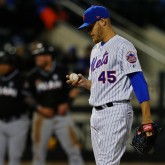 Primer Nearly any Mets fan perusing these pages likely remembers that amazing doubleheader in 2013 when Matt Harvey and Zack Wheeler teamed up to give a terrible Mets team a glimpse of hope. Friday night was a throwback, with Wheeler making his first start in two years the night after Matt Harvey made a solid […] 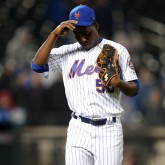 I think we can all agree it’s great that baseball is back. Baseball is wonderful, usually. But last night was one of those times when baseball is not wonderful. Was it really necessary for us to experience the laborious, low-scoring extra inning game that features pitchers like Josh Edgin and Rafael Montero so soon? Can’t […] 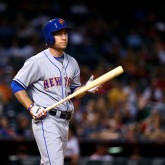 Over at the Baseball Prospectus main site, Patrick Dubuque and company are rolling out a new daily collection of short posts “… concerned primarily with the aesthetic, the metaphorical, and the ridiculous aspects of baseball as an unproductive labor that induces such devotion and contentment.” Every weekday, expect a couple of quick hits on a […] 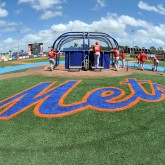 Welcome back to the conclusion of our BP Mets top 30 list. This list was put together by Baseball Prospectus Senior Prospect Writer Jeffrey Paternostro, BP Mets Prospect Contributor Skyler Kanfer, and myself over the course of the past few weeks. Full reports for prospects 1-10 are available on the main Baseball Prospectus site, we […] 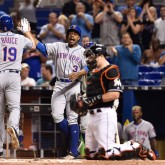 Executive Summary Norse gods are rejuvenated by the strep throat bacterium. Mets 12, Marlins 1. Discussion and Analysis Noah Syndergaard started for the first time in eight days. While extra rest this late in the season is a good thing in itself, Thor appeared unaffected by his recent illness. The Marlins scored a lone fluky run off the Mets’ ace. Dee Gordon […] 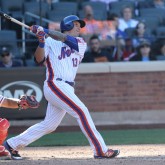 Robert Gsellman impressed with his best appearance yet – eight strikeouts over seven scoreless innings. However, the more notable pitching performances came from the Phillies, whose pitchers combined to hit four batters, walk nine, and allow 14 hits. Emblematic of these struggles, Jose Reyes came to the plate with the bases loaded in four (!) separate […] 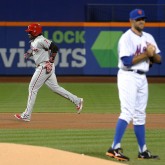 When the scoreboard flashed 10-0 in the fourth, some fans thought “no problem, we can come back. We’ve already seen record comebacks this week!” It’s one thing to dream about setting the record for biggest comeback in team history. After Terry Collins took out his four leading hitters, the replace-Mets did more than dream. They brought […] 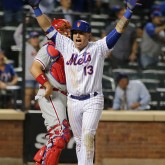 One of the prevailing memes of the latter portion of this 2016 MLB season has been that nobody seems to want to win the National League Wild Card spots. The New York Mets, who we counted out of the playoffs in a staff post less than a month ago, clawed their way back into contention […]